Treatment with Fungicides is necessary before sowing the seed 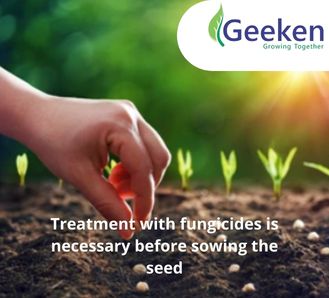 Fungicides are chemicals that kill or stop fungus and their spores from growing in crops. Fungi are parasitic organisms that interfere with plant nourishment. In a moist environment, the most common fungal infection occurs. Seed dressing or seed treatment is the process of treating seeds with an antimicrobial such as fungicides before sowing. One of the most significant advantages of seed treatment is that the amount of chemicals used is smaller than the amount used after sowing for treatment. It helps in preventing parasite fungus from attacking the seed.

During damp or moist conditions, the technique promotes plant stand as well as vitality. Additionally, during treatment, improve the chemical rotation process. It is also necessary to have a good awareness of the disease’s signs and symptoms that are distinct to each species. Fungi-infected seeds and seedlings result in a decrease in yield, quality, and profit. Powdery mildew, Downy mildew, and white blisters are the most frequent fungal infections. Pythium species, Fusarium species, and Rhizoctonia species are examples of pathogenic fungi. Fusarium rots, Rhizoctonia rots, and other illnesses are among the most frequent.

To purchase the best quality of Fungicides contact us at Geeken Chemicals.

For most agricultural crops around the world, pre-sowing seed treatment with systemic fungicides is a well-established technique. In recent years, there has been mounting evidence that fungicides used to treat diseases may mistakenly harm non-target species like endophytes. Endophytes in seeds may help in seed development, germination, seedling establishment, and crop yield. In this work, we explore the potential repercussions of indiscriminate seed treatment with systemic fungicide on seed endophytes and review recent literature on non-target effects of fungicidal treatments on endophytic fungal communities.

Many types of grass transmit them vertically from seed to seed, whereas others acquire them horizontally from the soil and environment. Though the origins and evolution of these creatures in plants are unknown, multiple studies have demonstrated that they help plants grow and develop, acquire nutrients, and protect themselves from abiotic and biotic challenges in a symbiotic relationship. In light of this, it’s reasonable to suppose that using systemic fungicides in seed treatment may have an impact not only on seed endophytes but also on seedling growth and establishment. While there is evidence that fungicides used to treat plant diseases have an influence on foliar endophytes, there has been little research on the impact of seed treatment on seed-borne endophytes.

The following are examples of pre-sowing seed treatments:

Seed treatments before planting It refers to the treatments given to seeds prior to sowing in order to boost germination and vigor potential while also keeping the seed healthy. Pre-sowing seed treatments include the following:

Seeds in good condition: It’s an important feature of a good seed. Even if a seed lot meets strict germination, vigor, and purity requirements, it may be useless to farmers if it is contaminated with seed-borne illnesses and insect pests, which can result in significant yield loss or even crop loss throughout an entire region.

Insecticidal and fungicidal treatments have the following advantages:

1. Assists in the prevention of the spread of plant diseases.

2. It protects seeds from rot and seedling blight.

4. It protects against storage bugs.

5. It prevents insects from entering the soil. Viruses, bacteria, fungus, nematodes, and insects are all capable of causing damage to the seed.

Chemical (fungicide) treatment protects against various seed rots and seedling blights that occur during storage or after planting. It’s not a “cure-all,” and once the plants are self-sufficient, it won’t keep them disease-free for the entire growing season. (The use of seed disinfection to control loose smut is an exception.)The three types of Fungicidal seed treatment are seed disinfection, seed disinfestation, and seed protection. A certain fungicide may benefit one or more of these populations.

Disinfection of seeds: It is such as the loose smut of barley and wheat, is the elimination of a pathogen that has infected and established itself in the live cells of the seed.

Disinfestation of seeds: The process of eliminating spores and other harmful organisms from the seed’s surface is known as disinfestation.

It is a chemical treatment that protects seeds and young seedlings from diseases in the soil. The most popular seed treatment methods are dust, slurry (a mixture of wettable powder in water), liquids, and planter-box formulations. Depending on their composition, seed treatment fungicides can be organic or inorganic, metallic or non-metallic, and, until recently, mercurial or non-mercurial. Before the cancellation of the “volatile mercurials,” fungicides for seed treatment were widely classified as volatile or non-volatile. A systemic passes through the host plant and suppresses or retards the growth of certain fungi and insects while having no effect on the host’s metabolic system when administered according to the manufacturer’s instructions.

1. Dust: It will exist during and after seed treatment.

2. Slurry: This type of fungicide is administered to the seed in combination with a soap-like water suspension that can be blended with the seed using a slurry treater.

3. Liquids: The “rapid wet” method refers to the employment of a liquid solution. A fungicide that is volatile is sprayed to the seed and thoroughly mixed with it. e.g. This approach can be used to apply chemicals such as pathogen, mercuran, and others.

During the early stages of development, the treatments are mostly employed to help seedlings endure drought and cold.

The following are the most important factors to keep in mind when seed hardening:

The amount of solution should never exceed the number of seeds. There should be no remaining solution because it will induce leaching. The germination process begins once the seeds have ingested water. It is necessary to dry the seeds to their original moisture level. These seeds sprout faster than non-hardened seeds when sown, but non-hardened seeds germinate more slowly.

The primary goal is to provide nutrients to seeds. The primary goal is to achieve high vigour in order to combat unfavorable soil reactions. For example, seed fortification with MnSO4 at 0.5 to 1%. will increase the oxidation-reduction potential of seeds, resulting in increased germination.

In this method, the nutrients are coated on the seeds. We can increase the size of the seed and make it free-flowing by pelleting it, which allows us to lessen the seed rate. It’s also necessary for aerial seeding of tree seeds (gum arabica). Lime, CaCO3, and chalk powder are inert materials.

Organic solvents gradually introduce chemicals into the seed. There is no need to dry the seed components in this process to restore the original moisture content of the seed. The organic chemicals are evaporative in nature, so following the infusion, we simply need to maintain the seeds in a dry environment for 5 to 10 minutes, during which time the organic solvents will evaporate and we can sow.

It’s a pricey operation, but it’s necessary, especially for large-seeded legumes like peas and beans. They are prone to soaking harm due to their high protein content and big embryo. Seeds that are high in protein are hygroscopic and hydrophilic. Osmotic priming entails gently allowing the seeds to absorb water. Maintol is an extremely poisonous substance. PEG is a non-toxic substance that steadily increases the amount of water absorbed by seeds. Seeds are invigorated by osmotic priming, which results in uniform, early, and higher field emergence, as well as higher seedling vigour.

Drilling with fluids: It was developed for germinated seeds. Guar gel is a jelly-like substance that coats the seeds. It serves as a barrier to protect germinated seeds from injury during sowing.

Seeds that are still viable are separated: It’s a novel concept, especially for groundnuts. This is a wonderful way to acquire the seed germination and plant population that you want. The actual population requirement for peanuts is 30 plants per m2. Groundnut has a seed multiplication rate of 1:8. This is the foundation for the advancement of this technology. There are two ways to accomplish this.

Treatments performed prior to storage

The primary goal of prestorage treatments on harvest-fresh seed is to preserve it from deterioration during storage. Prescribed prestorage seed treatments can help with seed storage, which is once again endangered by insect and disease attacks.

During senescence, seeds in storage acquire damage to cell membranes. Mid-storage seed treatments are capable of minimizing age-induced damage and restoring seed vigor to a degree, as well as improving seed viability and production of stored seeds. Dehydration is the process of soaking low and medium vigor seeds in water for a short length of time, with or without the addition of chemicals, to raise the seed moisture content to 25–30% and drying the seeds to safe storage levels. Treatments for hydration and dehydration.Is efficient in non-leguminous seeds of low and medium vigor. It would not germinate a seed that has already lost viability.

Even if all of these factors are taken into account, certain seed-borne illnesses and insects, and other pests can still degrade seed quality. The most cost-effective and efficient strategy to protect seeds against these pests and increase seed quality is to treat them with one or more insecticides, according to research. Because pesticides are harmful, extra caution and safeguards must be used when using them and when handling treated seed.

Related blog:Testing of Fungicides for the control of Mycosphaerella on Eucalyptu

Fungicides: What they are and how they work