What Are The General Uses Of Pesticides?? 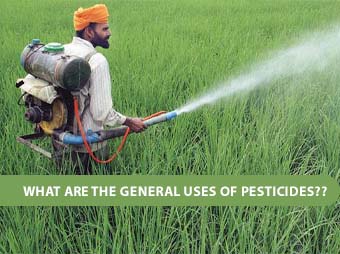 In past or present time pests are the major issues in the farms and farmers have to face these affairs ever since. To overcome these issues farmers use pesticides to get rid of unwanted pests.

Pesticides are used by farmers to their crops and plants to protect them from harmful organisms. Farmers and their crops frequently fall prey to disease and when crops starts decaying and  rot it majorly leads to starvation of food and reduction in yields and left a major effect on profitability, By this farmers suffers loss and it many times leads to the condition of poverty.

Pesticides play a vital role as they covers the risk of getting crops decayed and farmers state of poverty. Ruined crops and plants are not in a state to play the process of photosynthesis.

Many of the time questions occurs on these things that why crops gets damaged just by insects and the answer which came out was that the crops must be of cheap quality or low budget seeds but the point is that when sometime humans needs antibiotics to brings their health on normal stage just like that plants and crops also needs chemicals to make then stay healthy and fresh, Chemicals not just make crops healthy they also give a wide berth to weeds.

One more concern is that if we stop using pesticides it will lead to poverty for farmers and wastage of food and specially land degradation, If their will be loss of land then the farmers have to grow same amount of crops in other land and mostly in some cases farmer will be not in that position that after having a stage of poverty he will go and buy a land and lands are already in a shortage in todays as generation as population is increasing and lands are less according to that, and we can’t use the areas of rainforest because they are already a foremost part of an ecosystem. So using pesticides has its own crucial points which are less to describe.

When the point comes, that we can break the weeds and remove the pests by hand then this could be very difficult to do on a large area like farms this thing can only be done in small area like house gardening or farming etc. Pesticides are very important for farmers and their farms from over centuries and these will remain as much important in future centuries also if their will be an origin of some new technologies of removing pests but pesticide will stay forever.

In agricultural industries, Pesticides play a level of role which not even a single farmer can deny or ignore in their daily lives like in simple human beings life refrigerator is an important thing to keep food fresh it that sense only farmers need pesticides to keep their crops and plants fresh and protect them from staling or rotting. pesticides plays an effective role if they have been used properly they can sprayed on roots and shoots and on the leaves of the plants gently and by leaving a single corner if all the leaves and crops get an equivalent amount of pesticides then plants and crops will remain healthy for 2-3 months also and will lead to a relaxation point to the farmers. top fertilezers in india

If we talk about the expense of pesticides, chemical pesticides can be produced in large quantities at a quit low price. This makes the use of pesticides quit tempting since farmers don’t have to invest large amount of money, but could still significantly improve their crop yields. Therefore, pesticides are also quit economical and can be a major tool to maximise the profits of farmers. best agrochemicals company in india

Apart from numerous benefits now take a look at the demerits of pesticides there are various demerits also which every farmer should keep in mind, one problem of pesticides is that they can lead to soil pollution, over time significant amount of harmful elements will end up in soil which can be detrimental for many useful microorganisms populating the soil. Secondly their can be a groundwater pollution, if excessive amount of harmful chemicals related to pesticides use end up in the soil those chemicals will also get washed into our groundwater sooner or later. In turn, this can lead to serious groundwater pollution, pesticides can be harmful to our health as if farmers will not take proper precaution while using pesticides then they might suffer from serious long term long term health effects like cancer sooner or later in future.